There is a remarkable moment in “The Naked Kiss” when ex-prostitute Kelly (Constance Towers) is having a romantic moment with J.L. Grant (Michael Dante), a handsome and sophisticated heir to a fortune who will soon become her fiancé. He asks if she’s seen Venice. She confesses she has not. He says he’ll take her there right now. So he projects film he shot of the canals aboard a gondola and they inevitably fall into one another’s arms, making that silver screen sorta love where no love is actually being made but you know they are and the censors just won’t let you see it. And as they make silver screen sorta love, the imagined images of Venice morph with the present day setting of Grant’s living room and become inseparable, they are in Italy and Italy is the living room. This is director Samuel Fuller’s m.o. throughout “The Naked Kiss”, a 1964 neo-noir, repeatedly mixing the real and the imagined, what we see and what we think we see – or, what we want to believe we see. Fuller was unsparing and unsentimental as a filmmaker, which makes it all the more jarring that he allows sentiment to stick its flowery nose into “The Naked Kiss.” But then, that’s his aim, to demonstrate how the sentiment is but ostentatious window dressing for the malice lurking within. 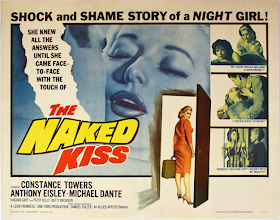 It doesn’t start so sentimentally. It starts with Kelly beating up her pimp and taking the $75 owed her, and not a penny more, signifying rough and ready scruples, before rolling into Grantville – Anywhere U.S.A. – in the guise of traveling champagne saleswoman. Griff (Anthony Eisley), a local cop, helps her pop a cork (and drink the bubbly) and then advises in no uncertain terms to take her business across the river to where the scofflaws roam. Why he even points her toward a club where she can peddle her merchandise, out of the sexual desire of his own heart, except when he shows up to have a look he learns from the maître d, if you will, that Kelly never arrived. This is because she’s through with hooking, see, intending to remake herself as an upstanding citizen, and accepted a job as a lilywhite nurse instead. Griff, however, is suspicious, convinced it’s all part of a diabolical ruse.

Throughout the film, Fuller overlays scenes of dialogue chock full of double entendres and maximum hard-boiledness with soothing sounds on the soundtrack, such as Beethoven’s “Moonlight Sonata”, but this is never more pointed than when “The Naked Kiss” momentarily turns into “Bells of St. Mary’s” and has Kelly serenade in an actual musical number with a few kiddos at the hospital. It's so saccharine it's off-putting, which is the point, sticking way the hell out, mocking the denizens of Grantville for the saintly light in which they see themselves. It also alludes to a crucial story detail that will not be revealed in this review. It will not be revealed because to see it unknowingly is to be left almost violently unsettled; and it leads to a moment of violence as shocking as it is understandable, whereby Fuller is inviting us not to be voyeurs as much as accomplices. 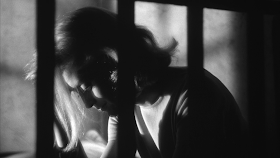 In light of this reveal and its aftermath, Kelly winds up behind bars and the town quickly turns on her. She scored her job as a nurse and found an apartment in which to live not because of resumes or background checks but because she looked so pretty, complete with an angel's face, judged wholly by the surface, which is how they prefer it, until her history is brought to bear. Fuller essentially takes the Hooker With The Heart Of Gold storyline, the one that so comfortably fits in the headlines because it so easily fulfills that Sin & Forgiveness storyline we crave, and skewers it.

Kelly may be playing nice and making amends but a Fuller’s point seems to be that playing nice and making amends is folly in a society conditioned to lock in on the scars of your past and dredge them back up no matter what. America believes in forgiveness, sure, so long as it’s willing to forgive, which it most often isn’t. “That diabolical, hell-conceived principle of persecution rages among some,” wrote James Madison to William Bradford two years before America was America, and Fuller may well take that as his motto. The conclusion offers Kelly vindication, but consider the last shot, walking off all alone, nothing nipping at her heels except her past.
Nick Prigge at 7:00 AM
Share