It’s a thin line between youth and middle-age, and the line becomes literal in “Neighbors” when a married couple with an infant daughter wake one morning to find a fraternity moving in next door. Yet it does not simply become a variation of old people yelling at young people to get off their lawn, but rather a raunch-prone illumination of the adage that youth is wasted on the young, and that only too late do adults realize this adage isn’t stock-in-trade but sheer blinding truth. Well, at least in theory. Because there is also a thin line between subversive and stupid, between making a statement and setting up gags, and “Neighbors” straddles that line throughout, if not expertly as least sufficiently. It can be dumb but never as dumb as its premise implies, often becoming a sharp and even unsettling story of what happens when the springtime of our lives becomes a withered summer. 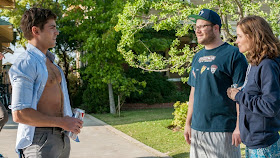 The opening ten minutes of “Neighbors” is a salvo of first-time parent struggle as Mac (Seth Rogen) and Kelly (Rose Byrne) cope with responsibility and repetition. So when Delta Psi materializes one house over and puts tapper to keg, their child-rearing instincts assume the worst while another part of them cannot help but be aroused at the idea of youthful reinvigoration. The frat’s President is Teddy, played by Zac Efron as if Stan Gable were Achilles, who is not smart enough to have any future plans but is wily enough to entrap the couple next door by using their longing for days gone by against them. Mac and Kelly want these supposed students to behave but don’t want to appear uncool. So they try a peace offering and when that fails they try calling the cops, and that fails too. They take their case to the Dean (Lisa Kudrow), and while once upon a time Deans were only out to curb the kids' enthusiasm, it appears they've also turned on the grown-ups who will soon be paying to send their kids to college.

Teddy and the boys issue a declaration of war and Mac and Kelly quickly follow suit. Hijinks ensue. They are quite often of an expectant shock and awe variety, but every now and then a moment rises to prove that R-rated comedy can yield brutal honesty. Consider Rose Byrne’s bout with nudity. This isn’t mud wrestling, this is motherhood, up front and out loud. Still, it’s not hard to detect the Teddys of the multiplex texting their bros in its aftermath: “Rose Byrne’s boobs!”

Rogen has long subscribed to a silver screen persona of the Man Boy, sort of a Peter Pan slacker – grown up, but not really, still choosing to put – in the parlance of our times and of the film – bros before hos. Rogen and others of Judd Apatow Delta Phi have been taken to task for this seeming refusal to mature, and while “Neighbors” was directed by Nicholas Stoller and written by Andrew J. Cohen and Brendan O'Brien, a reactionary tone via Rogen is detectable. His character isn’t just about to have a kid, he has a kid, and a square job to support it. That, and as an actor Rogen finally shows the willingness to cede center stage to the lady, the incredibly talented and terribly underrated comedienne Byrne, who earns a priceless monologue explaining that she doesn’t simply want to be the Supportive Spouse of so many god-awful rom-coms come before. He disagrees, crying: “We can’t both be Kevin James!” But they can. They can, Hollywood. They are co-conspirators, fellow agents of their own awakening, and their domestic strife emerges as the film's heart. 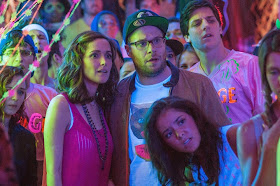 Of course, whenever the script gets stuck, and it does, it simply resorts to improv or more neighborly pranks. Eventually those pranks escalate into somewhat violent and ethically questionable territory, and perhaps that is why the film just sort of forgets about the baby’s existence as it builds to the outrageous climax. The baby tethers these parents to reality and, in turn, the parents tether us to reality and at a certain point "Neighbors", which admittedly is catering to future frat pledges as much as the we-have-a-mortgage crowd, must jettison reality to exist as a suitable box-office earner for its studio overlords. "Growth is good but never overrides buffoonery in a certain type of film," states Hollywood Code Section 612.117 4(c).

At one point Teddy provides an overview of his frat's history, from the fortuitous invention of beer pong on down to the Toga Party which, of course, was born from the "Animal House", a film that inspired Judd Apatow and all his cinematic offspring, including those that helmed "Neighbors". They grow up, they move on, but they are brothers for life, bound in spirit to Bluto and Delta Tau Chi.
Nick Prigge at 7:00 AM
Share