“Let them fight.” So says Dr. Serizawa (Ken Watanabe) of the monster clique standing firmly at the forefront of director Gareth Edwards’ variant on the apocalyptic fable of Godzilla. It is apropos because, as is often the case with such things, human beings, so self-satisfied with the gaudy array of weapons they have amassed, so huffy when having their technological superiority questioned, have found all their fancy-schmancy warheads and whatnot no match for a fire-breathing lizard gone loco. But it is also apropos because after the obligatory build-up, human beings take a decided backseat to the monsters and their mayhem. The offense of many disaster-laden Hollywood blockbusters is their lack of character development, which is to say they attempt to develop character, half-heartedly, and typically fail. Thus, Edwards essentially forgoes character development altogether. Most of the people, particularly its "leading man" (Aaron Taylor-Johnson?), are ciphers, existing at ground level to give us bearings. Then they get outta the way to let the monsters fight, and ultimately that human interest insignificance becomes emblematic of the film’s overriding idea.

It opens in 1999, a year after the release of Roland Emmerich’s critically reviled version of “Godzilla”, as if Edwards is returning to the scene of the cinematic crime to wipe it away and begin anew, where we meet an overworked American scientist named Joe Brody (Bryan Cranston) stationed at a nuclear reactor plant in Tokyo who, in one of Edwards’ innumerable wry twists, has forgotten his own birthday rather than his son’s. Drawing an uncomfortable parallel to the recent Fukushima Disaster, the plant melts down for reasons not as straight-forward as they seem, and so Joe spends the next fifteen years going full conspiracy theorist, finding him estranged from his grown son (Aaron Taylor-Johnson?) who now has a wife (Elizabeth Olson) and son of his own. Max Borenstein’s screenplay feints in the direction of exploring the toll a dad’s absence takes, and whether that rift can be repaired, but eventually forgets about it because, well, everything gets forgotten about when Honolulu gets stomped and San Francisco gets smashed.

Amongst the humans, Watanabe and Sally Hawkins as his scientific cohort, Vivienne Graham, tasked by a secretive conglomerate to study and then track the chaos-creating beasts driving the plot, are the only two who manage to stare down the special effects. They do this by subtly playing themselves as a Disaster Movie Comedy Duo, understanding full well their responsibilities are simply to show up when exposition is required, deliver it expediently but authoritatively (Hawkins’ English accent garners a notable assist in this regard because backstory blather, as Science has proven, always sounds better when spoken in the King's) and then stand slack-jawed in front of countless green screens. Truly, their facial expressions, fear and astonishment drawn out to absurd lengths, are a master class in drollery, and their breathless dialogue recitations evoke a summer matinee soap opera. Godzilla’s roar shakes the walls, but Watanabe’s confounded squint steals “Godzilla.” 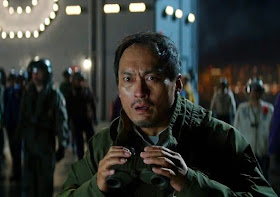 This is also speaks to how Edwards and his editor Bob Ducsay routinely find humor in their $160 million production and then deftly and almost disbelievingly juxtapose it with moments of genuine horror. “Monsters” is Edwards only previous credit, a film cultivated on a low budget that necessitated a genuine understanding of how to utilize set-ups and silence, and while the enormity of his latest project’s budget is on display, he still manufactures suspense without resorting to an assault of noise and fits of look-at-all-my-shit. This “Godzilla” runs for a considerable chunk of time before finally revealing its title character, a bold choice in an instant gratification climate, and then doesn’t skimp when it does appear, presenting him in clear, intensive shots that are awesome to behold while simultaneously working as an ode to old-school man-in-a-suit. And upon his arrival, the whole stage is ceded.

People run and people die and it feels immediate even if empathy for any of them is virtually non-existent because no one has been established beyond the most rudimentary detail. But then that pointed absence of empathy is Edwards most deliberate and impressive choice. “Nature,” says Serizawa, “restores the balance”, and that is what “Godzilla” of 2014 does. Man isn't the center of the universe and man isn't the center of this film. Over the years the sight of nameless extras fleeing through traffic-choked streets in disaster movies have become an easy punchline, but here they become the point. All the humans onscreen are reduced to hapless spectators. We don't care about them because nature doesn't much care for them either.
Nick Prigge at 7:00 AM
Share